Home » Articles » Implantation Bleeding: What is it and When Does it Occur?

Implantation Bleeding: What is it and When Does it Occur?

When an egg cell is impregnated it goes through the first few phases of its division. Then it attaches itself to the womb wall. This is when it starts to grow, and implantation bleeding can happen. Usually, it occurs around 6-12 days after conception. About one-third of all child-bearing women experience it during the early stages of the pregnancy.

This presence of blood is normal and nothing to worry about. It is very similar to a menstrual period and it is essential to know the difference.

Also, be aware that any other bleeding might be a sign of a miscarriage. About twenty-five percent of all pregnancies end like this. On the bright side, nearly half of the dangerous ones calm down, and pregnancy is normally continued.

There are different signs of pregnancy such as morning sickness and breast sensitivity. For a mother to be implantation bleeding is also one of them and is maybe one of the most obvious ones.

Trickle is usually visible a few days before the next expected menstrual cycle. This is the reason why many women think they got another period and not the start of a nine months journey.

Have in mind, that the day you had intercourse is not necessarily the day you actually got impregnated. Impregnation can happen even a week later. Sperms can survive in oviduct for a while (a few days) and wait for ovulation and an egg to get to.

Here are Some Other Initial Signs of Pregnancy:

What Color is Implantation Bleeding and How to Know the Difference?

First of all, it’s essential to know your body and your periods. How long do they last, are they painful, how much do you bleed, how do you usually feel during it, and so on …

Second, not two women in the world have the same periods. So, stay calm and don’t panic. What might be a painful period for your girlfriend, for example, doesn’t have to be even close hard cycle for you or somebody else. 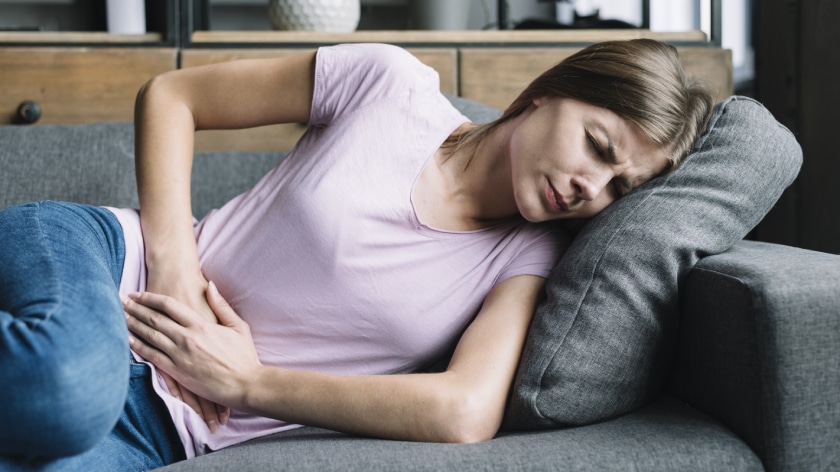 However, there are few key differences between two these two of bleedings and it is good to know how to differentiate them.

Often it resembles rust and looks like old and not fresh blood. Also, it can have an unpleasant smell. In rare cases, stains can be red, which indicates that it is very fresh.

Depending on a woman, these bleedings can last from just a few hours to three days. For ones who are pregnant for the first time, it’s possible to bleed a bit more than the one who has already become a mother.

As it can be confusing, trickle doesn’t guarantee the pregnancy. You should do the test or visit your gynecologist to be sure.

In order to do the test, wait for the predicted date of your upcoming period. If you do it earlier, results will not be correct.

Most of the pregnancies that start with implantation bleeding turn out fine. This bleeding is safe for both the mother and its future child.

If bleeding is not stopping and cramps are long and intense, they can indicate the problems, especially if they show up later during the child-bearing.

Make sure to contact your doctor right away. Implantation bleeding is not something to expect later, particularly not after the seventh week of pregnancy.

Be careful; if you are still bleeding and having problems after seven weeks, you should visit your doctor urgently. The bad news is that in case of excessive bleeding during early stages of pregnancy about 50% cases leads to miscarriage.

When you find the first spotting during the pregnancy, it’s good to find out the blood type and its rhesus factor. Depending on it, you will have to get an injection of Rh-immunoglobulin. Merely to avoid any further complications for your child. You can contact your gynecologist to find out that.

After the embryo is immersed in the womb wall, it can damage some of the blood vessels. This is why
bleeding can happen. It is expected to occur in about first six to twelve days from conception or ten to
fourteen days after ovulation.
Most of the time spotting is safe for you and your child and you should not worry about it. You might
have cramps. During the bleeding try not to put tampons in, avoid swimming and having intercourse.
Be careful and observe it. If it lasts longer, seek medical help.
Keep calm, and don’t stress yourself without any reason. Don’t listen to different stories around before
you go through it and check with an expert.
Everything seems fine?
Well, congratulations! You are about to become a mom!

How Often Should You Bathe a Newborn?