As a parent, you are eager to equip the nursery with as many helpful items as you can, including a functional baby monitor. However, many parents can’t help but wonder are baby monitors safe?

These gadgets are, by definition, a way for parents to follow their children and keep them safe. The World Health Organization has established that there are no negative side-effects to using baby monitors. The temperature and radio frequency they emit is too low to cause any real damage to those around the device.

They are mostly used during the night as this is a problematic period for an infant to be left alone. They could get their hand, foot or finger stuck somewhere, or experience irregular breathing. Worst case scenario – they can turn over and have trouble re-positioning themselves to breathe.

Being a vigilant parent is imperative, but we are going to explore some of the risks of using a monitor to follow your child’s safety effortlessly. Read our text below to find out which risks have a considerable impact on your little one, and which risks are common misconceptions.

Do These Devices Emit Radiation?

If you are eager to find out the amount of radio frequency in your home, try using a meter to measure each and every device. This way, you’ll get a clearer picture of what’s going on and what could be potentially harmful.

If you are worried about the radiation emission coming from the device, you can position it, so it is not in close proximity to your baby. You can install it on a level higher than your baby’s crib. You can try setting it up on the ceiling or a higher piece of furniture.

Can a Baby Monitor Malfunction?

A potential downside of the monitor is that, much like other pieces of technology, it can malfunction or crash. This does not pose a problem in itself as it can be easily fixed, but it can be a temporary safety issue. If it stops working in the middle of the night, you won’t be able to see or hear if your little one is in distress.

Because of this, we strongly advise you to get a safe baby monitor, which has positive reviews and recommendations. Get devices from well-known manufacturers which offer refunds and guarantees.

Which Monitors are Safe?

Apart from wondering are baby monitors safe in the first place, another inevitable question is which types of baby monitors are safe?

There is a wide variety of them, and the three main groups are audio, video, and movement monitors. Among these groups, there is no significant difference when it comes to safety. They are all useful and efficient in their own way.

Apart from this division, there is a difference between the ones which need a WiFi connection and the ones that don’t. This is where the safety issue arises.

There is a common misconception that the ones which need a WiFi connection are less safe. Although the device can be hacked into, it is highly unlikely it will actually happen. In one respect, yes, they can be hacked into, but this can be prevented with passwords and extra caution.

Unlike radio monitors, WiFi devices can stay protected by regularly updating the system and having a secure password.

Don’t ignore any glitches and irregularities on your device as they can be a sign of malfunction or hacking. Follow any changes and make sure to update your software regularly.

On the other hand, the monitors which don’t operate via internet connection need a radio frequency to function. This is much more risky as anyone can tune into your radio frequency and eavesdrop.

Though there’s no way to put a stop to it, keep in mind that in order to actually tune into your frequency people have to be physically extremely close to your home – which is also, highly unlikely. 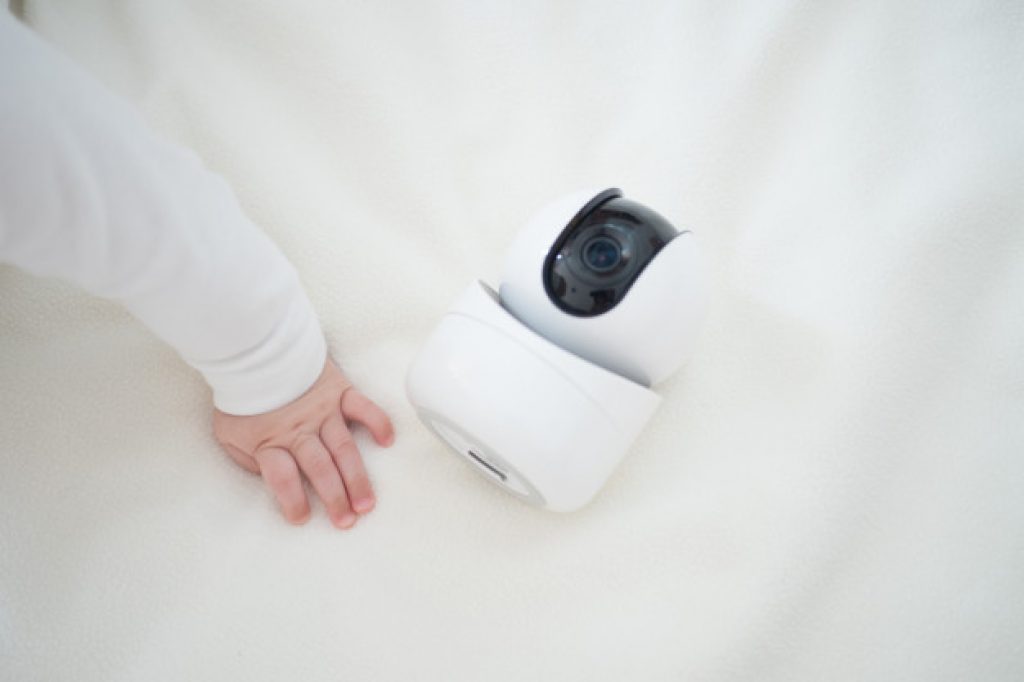 Is It Safe to Connect to a New WiFi?

If you find yourself without WiFi outdoors or while traveling, don’t fret. You can easily connect to a new WiFi, but you have to keep some things in mind.

Make sure the internet connection you find is stable and won’t shut down from time to time. If this is not possible, try connecting the device to your phone and then use the 3G signal on your mobile.

How to Play It Safe?

There are several methods you can apply to keep your device safely in check.

First off, make sure you do the research before you actually buy a baby monitor. See which features you’ll need and use, and find a reliable manufacturer. Don’t shy away from investing in a high-quality device as it will give you your money’s worth.

Secondly, if you do opt for a device which requires an internet connection to operate, make sure you find one which offers encryption as a safety measure. This way, you can ensure that your video transmission is for your eyes only.

The best monitor will be the one which has features helpful for you and your family. That being said, not all devices are equally safe.

Between audio, video, and sensory/movement monitors, there is no significant difference. Video monitors might be more prone to getting hacked into, but then again, audio transmission can also be tuned into. Therefore the choice you make between the three is not that important.

What is important is that you find a manufacturer which produces high-quality, reliable products. This way you’ll know what you’re buying, and you can safely set it up and have it updated, fixed, or replaced if it malfunctions.

If you opt for a WiFi monitor, make sure you get one with the option to use encryption and keep your software updated. If you decide on a device with a radio frequency, keep it at a safe distance from your baby.

Do I Need a Baby Monitor?

Is Your Baby Monitor Being Hacked? Here's What to Do