Are you a mother whose baby has just arrived, or is on its way? If you are, you’re probably thinking about the “sleepless nights” that you heard so many new parents talking about. With the average newborn sleeping for most of the day and waking up only for feedings, the parent’s sleep deprivation is unavoidable – it’s just a part of the package.

To help you out with that difficult first year of your child’s life, we’ve decided to take a closer look at the sleeping schedule for babies. We’ll also address the topic of common baby sleep problems.

When you imagine a sleeping baby, do you see one sleeping through the whole night or the one constantly waking up, crying, and wanting to eat?

A sleep schedule of a baby largely depends on its age. For example, an infant that is just two months old still wakes up at night to eat, while the baby aged six months is capable of sleeping through the whole night. The only case in which waking up in the middle of the night might be seen as a problem is if it happens to an older infant.

The scenario mentioned above highlights how vital it is for the parent to understand that the sleeping schedule for babies changes as they’re getting older. It’s pretty safe to say that the first-time parents won’t be so frustrated by all of this if they actually know what they can expect from their child’s sleeping patterns.

One of the most common concerns among new parents is wondering when their baby will start sleeping through the whole night.

A newborn baby typically sleeps for up to 20 hours a day. However, the NSF (National Sleep Foundation) recommends around 14 to 17 hours. In most cases, this will be broken into 2-3 hour stretches. The baby wakes up to eat and then immediately goes back to sleep.

Once it is one month old, a baby might begin sleeping for 14 hours each day. This is broken down into one long stretch of 4-5 hours which is followed by instances of waking up to eat every two hours. 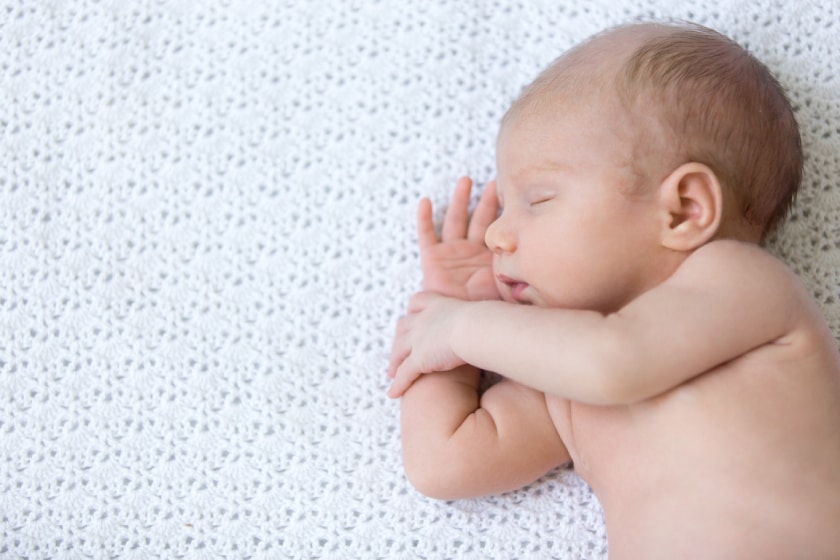 The remaining part of your child’s first year will probably look like this:

An important thing to keep in mind here is that 8-9 hour sleeping sequences we’ve mentioned mean sleeping for that entire time without waking up. Even though some kids never sleep that long, a mom can expect her baby to rest for five to six hours without waking up by the age of three to four months. In case your infant doesn’t sleep for that long, make sure to consult your pediatrician.

When talking about the sleeping schedule for babies, one also has to address the topic of the common problems related to it.
Although older toddlers can resist going to sleep and can also sometimes wake up at night, the sleep issues concerning infants are more about waking up at night multiple times. Sleeping through the whole night is, actually, a significant developmental milestone that every baby needs to meet.

In other words, it is entirely normal for the baby aged three months to wake up to eat. However, when this is done by a baby aged six months, you’re probably looking at a sleep problem that needs fixing.

How to Get a Baby on a Sleep Schedule?

The best way to fix these kinds of issues is by working on the child’s bedtime routine or helping the baby learn to fall asleep on its own. Typically, this means falling asleep without drinking a bottle, nursing, or rocking. You can still do all of these things, but it’s essential to move them earlier in the routine. The baby needs to be put to bed while it’s still awake, but feeling drowsy.

It’s important to stay consistent with the routine and do the same things, at the same time, and in the same way every evening. In case your baby is not settling down after a couple of minutes, quickly offer comfort and put it back down before it falls asleep. Eventually, your child will learn to fall asleep on its own, and also to comfort itself back to sleep in case of waking up at nighttime.

Another thing worth mentioning is that it’s important to teach the infant that there’s a difference between night and day. Some babies are night owls and are wide awake just when the mother wants to go to sleep. Such babies need to be taught to distinguish the day from night.

This is best done by interacting and playing with the child as much as possible during the daytime. Furthermore, it’s essential to keep the room bright and light and to keep the daytime noises (dishwasher, phone, music) just like they are – no minimizing. At night, on the other hand, the noise level and lights need to be kept low, and a mother should not spend too much time interacting with her newborn. Before long, he or she will finally figure out that nighttime means that it’s time to sleep.

Ultimately, it’s important to stress out that every sleeping schedule for babies is just a suggestion, as babies are different from one another. Make sure to watch for changes in your child’s sleeping patterns. Some changes are entirely normal and are a part of the developmental process, but some could be the signs of possible health problems.

To make monitoring your baby’s sleep easier, consider getting a bassinet – it will allow you to keep the child close to your bed at night.

When do Babies Sleep Through the Night